A Bed That Converts Into Coffin As Coronavirus Body Count Rises 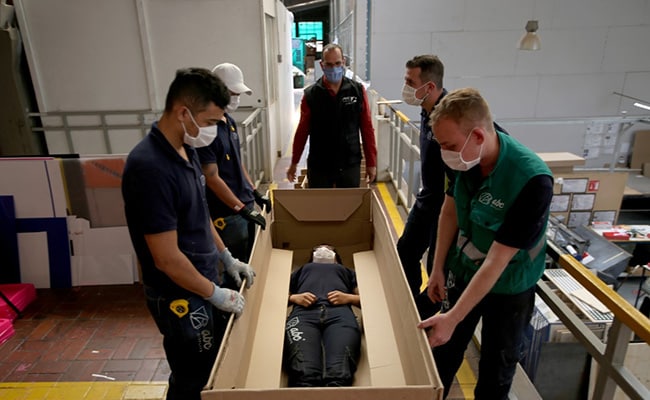 Disturbing images of bodies of dozens of coronavirus victims awaiting burial on the streets of Ecuador’s largest city Guayaquil has motivated a businessman in neighboring Colombia to design something he hopes would prevent a similar scenario in other countries: hospital beds that can be converted to coffins.

Colombia’s health system so far has not been overwhelmed by COVID-19 patients – the country is coming to the end of two months of quarantine – but the pandemic has caused overcrowding at hospitals and funeral homes elsewhere.

“We saw what was happening in Ecuador, that people were taking dead family members out onto the streets…what’s happening also is that funeral services are collapsing with the pandemic,” said Gomez, 44. “So we started to develop a bed that could be converted into a coffin.”

The beds have metal railings, wheels with brakes and can be inclined up and down. They can support up to 150 kg. (330 lbs.). He said the biodegradable bed-coffins cost between $92 and $132.

Gomez hopes their low cost will mean local and provincial governments can outfit rural or under-funded hospitals cheaply. Converting them to coffins if a patient dies will also reduce possible contamination, he said.

“Once the bodies are prepared it is converted to a coffin and covered,” said Gomez at his Bogota factory, which can produce up to 3,000 beds per month. “The staff who are nearby are not exposed to biological risk.”

The first bed-coffins will be donated to the hospital in Leticia, an Amazonian Colombian city which has a high number of cases and limited hospital capacity.

Gomez says he has already spoken to potential buyers in Peru, Chile, Brazil, Mexico and the United States.